NEW: The Lohvian Cycle I by Alan Burt Akers 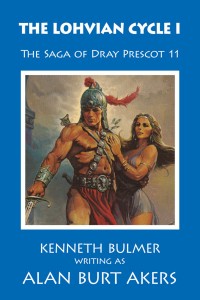 The Dray Prescot Saga, omnibus edition, containing books 38 to 40 in the epic series.

Sent by the Star Lords to save a life from a fire, Dray Prescot finds himself utterly helpless in a strange land. Confused and unable to move, he is cared for by Mevancy, a woman with a strange and wonderful secret.

But why have the Star Lords left him there? Who is he expected to protect, and how is he supposed to do it? Flying a kite one moment, battling through an inferno the next, Prescot is flung headlong into fresh adventures under the mingled streaming lights of the Suns of Scorpio.

Down in the southern half of the continent of Loh, in an isolated desert land where the belief in reincarnation as a punishment is firmly accepted, Prescot and his new comrade battle intrigue and assassins and attempt to follow the desires of the Star Lords. This new kregoinya is Mevancy nal Chardaz, a most spirited lady who means to keep Prescot thoroughly in his place. Not completely sure if the guardian Tuong Mishuro is the man the Star Lords wished protected, Prescot and the guards have been hoodwinked. Prescot races to Mishuro’s assistance, to arrive too late. Thus continues the tale begun in Scorpio Reborn.

In Scorpio Assassin, Dray Prescot defied the Star Lords by saving Queen Leone from a grizzly death, and now he must answer for his disobedience. But the Star Lords argue over him and Dray is dropped accidentally in a walled garden. He is lost. Even the Star Lords don’t know where he is. He knows he is on the splendid if horrific planet of Kregen, and in the continent of Loh, but nothing is familiar. He must find his way back to Makilorn, and from there to Tarankar to train an army to fight the Shanks…

For more info, please see the The Lohvian Cycle I page on mushroom-ebooks.com.