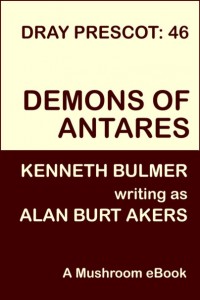 The long-awaited Demons of Antares by Alan Burt Akers, book 46 of the Dray Prescot series, is now available from all good ebook stores, including Amazon (for Kindle), iBooks, Smashwords, Google Play Books, Kobo, Barnes & Noble (for Nook Books), or read it with a Scribd subscription.

Volume forty-six in the saga of Dray Prescot of Earth and of Kregen, and the third book of the Balintol Cycle.

Dray Prescot is on the subcontinent of Balintol where he has the task of uniting the disparate countries so that all Paz can defend itself against the predatory, fish-headed Shanks from the other side of the world. This undertaking is complicated by the megalomaniac desires of certain princes and nobles who are determined to win the crown of Tolindrin for themselves, and are willing to destroy anyone who gets in their way. They have hired mercenary armies and allied themselves with the traditional enemies of the country.

He has to use all his strengths and all his scheming and tricks to achieve his goal with as little bloodshed as possible. The Star Lords have thrown him into new danger that is all too familiar to him as a Kregoinye. For the sake of his love of Delia, Delia of Delphond, Delia of the Blue Mountains, Dray Prescot sets everything else aside and throws himself into new and deadly hazards under the streaming mingled lights of the suns of Scorpio.

For more information, please see the Demons of Antares page on mushroom-ebooks.com

Next post: NEW: The Lohvian Cycle I by Alan Burt Akers