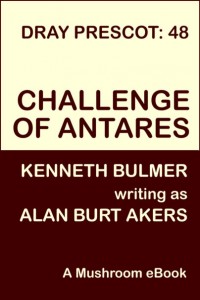 Volume forty-eight in the saga of Dray Prescot of Earth and of Kregen, and the fifth book of the Balintol Cycle.

Born in 1775, Dray Prescot joined the Royal Navy as a boy when his father died from the sting of a scorpion, and his mother followed soon after. The life in Nelson’s Navy, harsh, intolerant, formed and molded him. He has been consistently passed over for promotion, even though he has fought his way from the lower deck through the hawsehole to the quarterdeck. Now, together with the rest of the world, he considers himself a failure.

Just recently he has been experiencing unsettling dreams, of weird places and animals, strange beyond the comprehension of a plain sailorman. Through these eerie nightmares he occasionally glimpses the vague face and form of a woman who touches him profoundly and for whom, not really understanding why, he knows he would lay down his life.

For more info, please see the Challenge of Antares page on mushroom-ebooks.com.

Next post: NEW: Wrath of Antares by Alan Burt Akers