The Balintol Cycle II is now available in hard cover 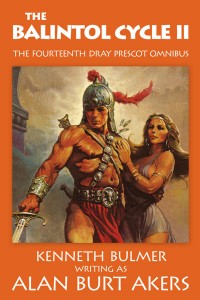 The Balintol Cycle II by Alan Burt Akers, the fourteenth Dray Prescot omnibus, containing books 47 to 49 in the epic series, is now available in hard cover from good book stores everywhere, including Amazon (this link opens at the most geographically appropriate Amazon store) and Barnes & Noble.

Next post: The Spectre Cycle is now available in hard cover edition